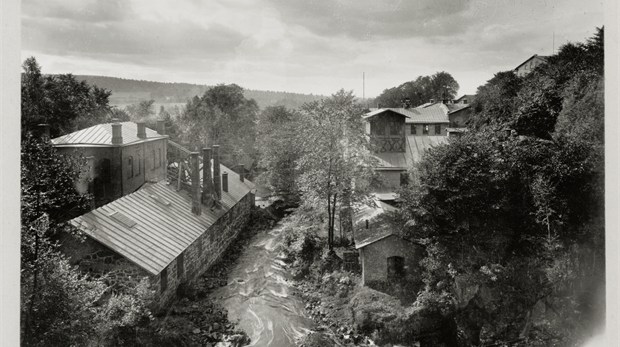 In 1689 the first Husqvarna plant – a weapons foundry – was established in the small town of Huskvarna in the south of Sweden. Over the years, our passion for engineering has paved the way for numerous innovative solutions in very different areas – from rifles and sewing machines through to motorcycles, kitchen equipment, chainsaws, lawn mowers and much more. As we see it, it’s all about constantly pushing boundaries and setting new standards in technology and usability. We call it innovating the future.

For us, innovation must have a purpose. In our case it has always been to give experienced craftsmen as well as “the ordinary man or woman” the confidence and capability to get the job done, safely and as smoothly and efficiently as possible. That was the case when we began manufacturing rifles back in the 17th century and still is in today’s development of our next-generation of power tools.

Let’s take a look at our journey so far and some of the highlights that have contributed in making Husqvarna a global brand and a leader in outdoor power products.

1689 – hydropower paves the way for quality craftsmanship
The first Husqvarna plant, a weapons foundry, was established beside a waterfall. Hydropower and extreme attention to detail combined with high levels of quality control paved the way for Husqvarna’s success as a weapons manufacturer. For instance, every weapon was test fired to ensure it worked perfectly.

1872 – breaking new ground
By the end of the 19th century the era of military weapons production came to an end. However, the machinery used for production of rifles turned out to be well suited to making sewing machines and soon Husqvarna-branded cast-iron sewing machines were being exported all over the world.

1874 – revolutionising cooking
At this time many people still had to do their cooking in pots over an open fire. Our engineers saw the potential for making cooking both easier and safer. A grey-iron foundry was established in the existing factory. Now the Husqvarna brand became synonymous with stoves, ovens and kitchen equipment. Husqvarna’s meat mincers were a great export success with over 12 million exported worldwide and our cast-iron wood burning stoves were a success that lasted for decades.

1877 – greater focus on hunting weapons
After nearly two hundred years as a manufacturer of military weapons our focus shifted to hunting weapons. Covering a period lasting more than a hundred years, the Husqvarna brand became a quality mark among hunting weapons collectors around the world. Weapons production ended in 1989.

1896 – the first Husqvarna bicycle
By the end of the 19th century bicycles, or velocipedes as they were called, were very popular so Husqvarna decided to grow its business with this new means of transport. In 1898 a Husqvarna bicycle could cost from 250 Swedish krona and up, depending on model and equipment. Production continued until 1962 when it was transferred to Monark of Sweden.

1903 – a legendary motorcycle brand is born
By using our previous experience in the precision engineering of weapons, sewing machines and bicycles, the first Husqvarna motor velocipede (a bicycle equipped with a single-cylinder engine) was introduced in 1903. Shortly after that our first real motorcycle left the production line. Since then our motorcycles have gone on to achieve great success worldwide. For instance, in 1982 three of our military motorcycles reached the top places in the Paris-Dakar rally in the 126–250 cc class. Today, Husqvarna motorcycles are manufactured in Mattighofen in Austria by Pierer Industrie AG.

1918 – Husqvarna puts its name on a lawnmower
This is the year that Husqvarna acquires a nearby foundry, Norrahammars Bruk, and the product range expands to include lawnmowers. Ever since we have consistently been setting new standards for efficient mowing. From small but effective improvements on manually operated lawnmowers in the past, to today’s ride-on mowers with articulated steering and outstanding manoeuvrability.

1959 – changing the chainsaw market
The Husqvarna 90 – our very first chainsaw – was launched in 1959. It had a powerful and lightweight engine that was inspired by our motorcycles. With increased usability and reduced noise it helped us set a new standard in chainsaw development. So began an on-going journey of innovations, including the LowVib® anti-vibration system (1969), the first automatic chain brake (1973), the TrioBrake™ chain brake (1999), the X-Torq® engine technology (2005 ) and today’s sophisticated battery technique.

1960’s – revolutionising cooking once again
In the 1960s, we influenced cooking again by launching a cupola-shaped microwave oven – a perfect combination of engineering and design.

1987 – the year of the Rider
Our first ride-on mower takes to the lawn. Thanks to its front-mounted cutting deck the new Husqvarna Rider offered outstanding manoeuvrability and made cutting easier, more efficient and safer.

1995 – the robotic era begins
In 1995 we introduced the SolarMower solar powered robotic lawn mower, a predecessor to the Automower®. Some thought it was too futuristic, but we saw the potential of a self-operating and silent mower that was capable of delivering perfect cutting results while freeing up time for homeowners and maintenance workers.

2005 – an environmental breakthrough
The launch of the exclusive X-Torq™ technology saw Husqvarna set a new standard for two-stroke engines. X-Torq™ meant more power for our customers and less impact on the environment. It also meant reduced fuel consumption by up to 20% and reduced emissions by up to 75% over other conventional 2-stroke engines. Good for the environment and still plenty of power for you.

2009 – goodbye to manual engine adjustments
AutoTune™ is a feature invented by Husqvarna that gives the engine optimal performance without the need for manual adjustments to the carburettor. It automatically compensates for variations in fuel quality, blocked air filter, changes in altitude and temperature fluctuations – thereby saving both time and work for any operator.

2013 – third-generation Automower®
19 years after the introduction of our SolarMower we have an entire range of robotic mowers that take care of thousands of lawns of all shapes and sizes, all over the world. In 2013 we launched the 3rd generation robotic mower, a machine with built-in GPS.

2014 – the journey continues
We constantly look beyond the expected to develop products that help our users achieve more. This approach has driven us for 325 years and it is still going strong. It has helped us become the global leader in outdoor power products and it will continue to help us push boundaries and create tomorrow’s innovative solutions.