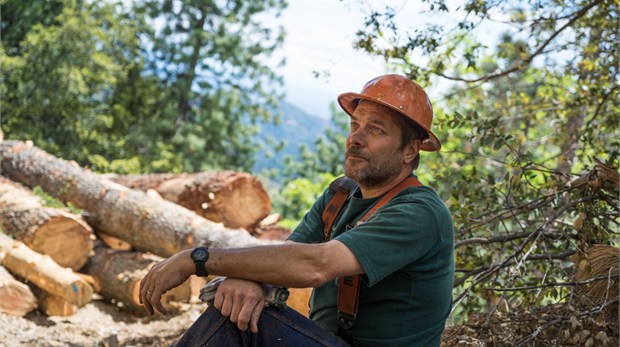 It’s a warm, dry, remote location high in the mountains. Big trees are felled here at a rapid rate on the steep slopes. It’s a tough environment that makes great demands on both the loggers and their machines. Jaime Wagenfuhr and his son Graham are enjoying every minute. Using chainsaws with the self-adjusting carburettor AutoTune allows them to work unhindered and efficiently – at all altitudes and at all temperatures.

We’re up in the mountains at Rainbow Lake, just over forty kilometres west of the city of Redding in Northern California on the west coast of the United States. Jaime Wagenfuhr sits at the controls of a loader. He lifts and places big tree trunks in piles, waiting for the timber trucks to take them down the winding, dusty mountain roads.

Jaime started working in the forest by pure coincidence. Having lived and worked in Los Angeles for a while, he decided to move home. He needed a job and got in touch with a friend who needed someone who could use a chainsaw.

“You see the results every day”

“That was 30 years ago and I’m still left here”, he says with satisfaction.

However, nowadays Jamie Wagenfuhr runs his own logging business.

“I like to be outdoors in these beautiful surroundings. It’s a tough job, but it’s fun and rewarding. You see the results of what you’ve done at the end of each day”.

His son Graham agrees. He’s been in the forest since childhood and has gradually learned the trade. He’s now one of the people who fell and trim all the trees before they’re pulled up the slopes using heavy cables attached to a forestry machine.

The climate is a tough challenge.

“How can you not love a place like this?”, says Graham, gazing out over the valley while he sharpens the chain on one of the saws.

“But while there is beautiful greenery and beautiful views everywhere you go, it’s tough out there. There are plenty of treacherous oak trees that can quickly become a death trap if you miscalculate when felling”, says Jaime. The climate is another tough challenge. The temperatures often go above 50 degrees in the summer. And there are the differences in altitude. One week Jaime, Graham and the others might be working down in the valley. The next week, they’ll be logging at much higher altitudes.

Adapts to the altitude, temperature and fuel.

To meet these changing conditions, the Husqvarna 562 XP AutoTune has become part of Wagenfuhrs’ standard machinery. Autotune is a feature that always ensures optimum engine performance by automatically adjusting the carburettor based on current conditions. It fine-tunes the engine according to high or low altitudes and temperatures, and also ensures that the engine runs perfectly and if you are switching between different types of fuels (e.g. to a fuel with higher ethanol content).

“Usually when we’re working at an altitude of over 1,300 metres, as we are at the moment, we have to adjust the engine. But we don’t need to do that anymore. The saw adjusts itself and works well at all altitudes”, says Jaime.

“The saw always starts up quickly and runs smoothly. It’s also much sharper than a lot of other saws of this size”, says Graham.

The Wagenfuhrs use only Husqvarna saws. Husqvarna caught Jaime’s eye because many years ago his father-in-law bought a second-hand Husqvarna saw for sawing timber.

“As far as I’m concerned, Husqvarna has been making good saws for 25 years. Operating costs are low because they rarely break down. If you’re constantly having to replace the saws, you’ll never get the business to work”.

“It means everything to have the saw always working. It’s time, it’s money. Everything works properly and allows you to work efficiently” adds Graham.

Even though it’s a tough job, working conditions have improved considerably in recent years. There were no roads when Jaime Wagenfuhr started working in the business.

“Every day it took us two hours to get up the mountain to fell trees”, says Jaime.

How long do you think you’ll carry on logging?

“Probably until I can’t carry on any more. But I’m still pretty young, so it’ll be a while yet. Otherwise, I would be happy to support Graham if he wants to carry on the business at some point in the future”.

It’s our 325th birthday! A look back at our finest moments
Innovating the future