How to mix two-stroke fuel 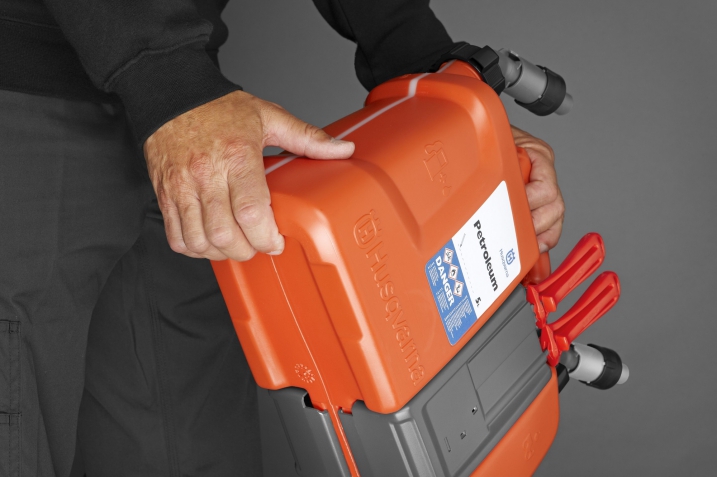 Unlike a four-stroke engine, a unique feature of a two-stroke engine is that they do not have an internal oil reservoir. Instead, two-stroke engines require the owner to mix oil into the fuel at a predetermined ratio in order to ensure the engine receives adequate lubrication during operation.

The first true two-stroke engines were introduced more than a century ago and used to power motorcycles. These days, you’ll find two-stroke engines in all kinds of equipment, such as chainsaws, grass trimmers and hedge trimmers, largely because two-stroke engines have fewer moving parts, generate less heat and are in many ways more efficient for their size.

The leading cause of contaminated fuel in Australia is dirty fuel storage containers. For this reason, it is essential fuel is stored in a clean container specifically designed to carry fuel.

While fuel jerry cans are great, newer specialist fuel containers to the market such as the Husqvarna Combi Can have been designed to make storage safer and refueling less messy, thanks to inclusions such as the no spill valves, on-board tool storage and dedicated tank for two-stroke oil.

When selecting the type of unleaded fuel you use, you’ll need to consider the following.

Here’s a handy table that helps explain what two-stroke oil to use with each type of fuel.

You’ve got your clean, empty fuel can and a good supply of fresh petrol. Now it’s time to make the most important call of them all – choosing the right oil for your two-stroke fuel mix. Husqvarna offers two types of two-stroke oil:

The Low Smoke+ oil is a mix of mineral and synthetic oils. This oil gives very low smoke emissions, especially important when used in products often run in densely built up areas. It also provides a lower engine temperature which extends the engine’s life. The formulation used in Husqvarna Low Smoke + oil also provides seizure protection, both against lean as well as carbon related piston seizures.

Mineral oils usually cost less than synthetics and are great for engine lubrication. While oils made from a natural petroleum base do a fair job of cleaning and filtering engine contaminants, they can leave behind heavier deposits than their synthetic counterparts.

Over time, you may end up with burnt carbon or gummy residue buildup on the piston which can lead to more maintenance and compromised performance. So manufacturers often mix in additives that help improve combustibility.

Full synthetic oils demonstrate superior combustion characteristics on top of delivering great lubrication. With little to none of the mess that a petroleum based oil can leave behind, leaving you with a much cleaner engine. They’re generally formed from a mineral base. Plus additives like octane enhancers, detergents and stabilisers to help burn cleaner than other engine oils. And produce much less smoke.

Semi-synthetic oil meets you in the middle. They’re primarily comprised of high-quality mineral oil. But mixed with additives and synthetic polymers to deliver a cleaner burn than a strictly petroleum based product. Semi-synthetics cost less than full synthetic oils, offer good combustion properties and give you better lubrication than you’d get from a standard, low quality mineral oil.

The correct mixing ratio for your Husqvarna is detailed in the warranty handbook.

As a general guide, a fuel / oil ratio of 50:1 is recommended in Husqvarna products up to and including 75cc. In certain heavy use applications, models above 75cc may be run on a mix of 33:1.

To make mixing your two-stroke easier, this two-stroke fuel to oil ratio conversion chart will help you calculate exactly how many parts fuel you need for every part oil.