History of the Chainsaw – Celebrating 60 Years 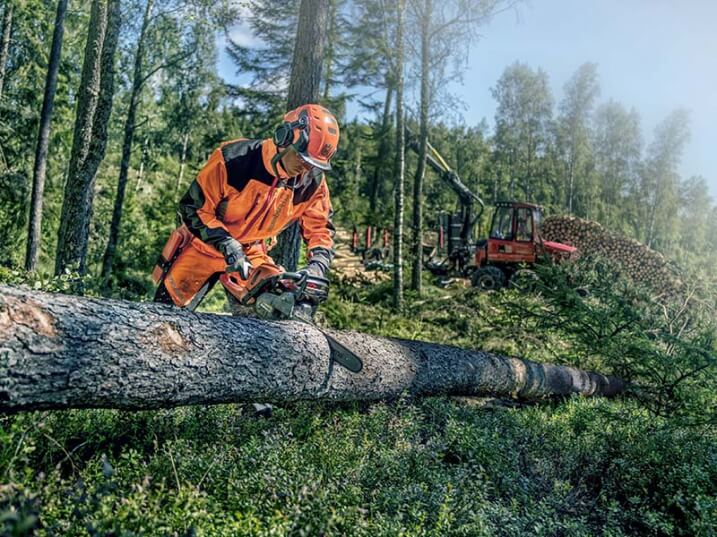 2019 is the year that Husqvarna celebrate 60 Years in the Chainsaw business! Chainsaws have come a long way from humble beginnings to the powerful and efficient tools they are today. We look back on the history of the chainsaw to the present day to see how it’s evolved.

Chainsaws have had a huge impact on the timber and forestry industries. Although today we take them for granted, our ancestors collected wood using axes and other heavy objects; a strenuous and time-consuming procedure.

And that was their reality, from antiquity until the conception of the first modern chainsaw. Felling was dangerous and time-consuming, a challenge that required coordination and persistence.

Forests were the center of human civilisation. Those communities that produced more wood were able to build shelters, thus surviving under harsh weather conditions and overcoming other difficulties.

Wood was used to create a multitude of simple tools and more complex structures. Those who controlled timber production were also able to master the elements. With wood came fire. Fire was then used to heat up metal, creating more advanced weapons, armour and war machines.

Needless to say, wood would rule the world.

Saws were already in use during the first quarter of the 19th century. In England, large circular and band saws were used as a means to refining and cutting large pieces of wood in the desired thickness and length. Axes were still used as saws were unable to cut through thick trunks.

The origins of the modern chainsaw are debated. The first chainsaw was designed by German orthopaedist Bernhard Heine in 1830. He called it the osteotome, from the Greek osteo (bone) and tome or tomi (cut); literally, the bonecutter.

This chainsaw, as well as many that followed, were used for medical purposes. They resembled the modern chainsaw in design but were smaller and required manual turning of a handle to move the blade that carried the cutting teeth.

At the beginning of the 20th century, many researchers were looking for ways to power stronger and more efficient chainsaws. The first patent for an electric chainsaw, the “endless chain saw” as it was called, was granted to Samuel J. Bens.

In 1926, the first electric chainsaw that would move to the production line was patented by Andreas Stihl. It was a heavy and bulky model, weighing in at 116 pounds. Troops brought the model to Europe in 1941. Before the end of World War II, all chainsaws were wheeled and had to be carried and used by two people. As aluminium alloys and other forged steel parts were developed, chainsaws began to get lighter and lighter.
Rapid Evolution

Once the chainsaw was brought to Europe, everything changed. In 1959, Husqvarna launched its first chainsaw, the Husqvarna 90, a beautiful piece of machinery equipped with cutting-edge mufflers that would reduce noise levels by 100%. 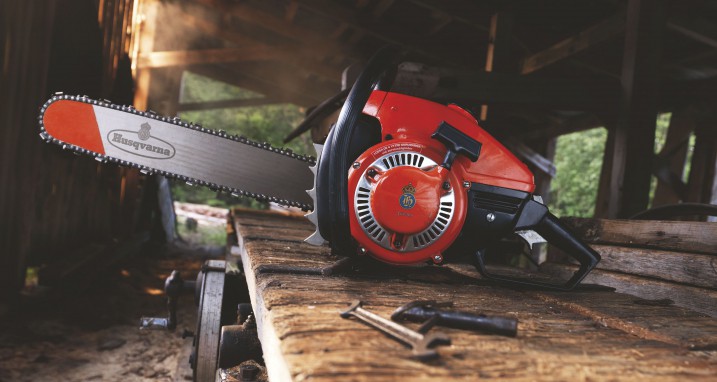 Pictured above: Husqvarna 90 Chainsaw from 1959

The innovation didn’t stop there. In 1964, Stihl introduced the first anti-vibration handle that used buffer elements to absorb vibration from the blade and engine. However, Husqvarna perfected the anti-vibration mechanism with the Husqvarna 180. The model was a huge success, kickstarting exports to the North American continent. 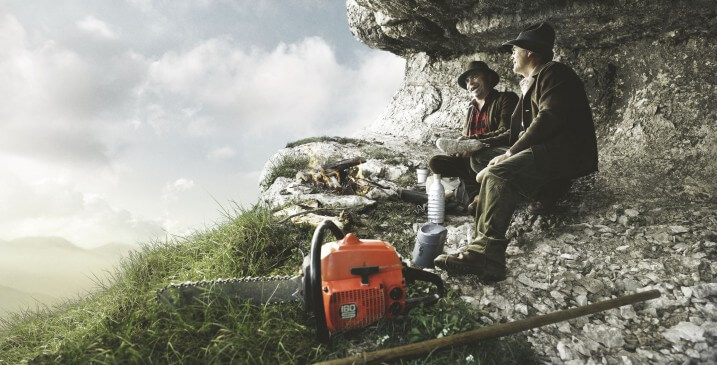 A major breakthrough came in 1973, when Husqvarna, concerned about safety issues, created the automatic chain break. Safety standards were effectively established by Husqvarna’s revolutionary design. Thousands of injuries were prevented as a result of this discovery.

In 1980, Husqvarna launched the Husqvarna 40, a chainsaw made of lightweight composite materials. Its compact design and reduced weight meant it could be used for longer periods of time.

Husqvarna revolutionised the chainsaw industry once again by introducing the world to the AutoTune function. The new innovation, introduced in 2009, regulated fuel flow automatically, optimising performance and minimising exhaust emissions.

In 2012, Husqvarna launched a range of battery products that offer petrol performance. This effectively meant zero direct emissions and reduced levels of noise. As a result, maintenance was simplified and vibration levels reached a record low. 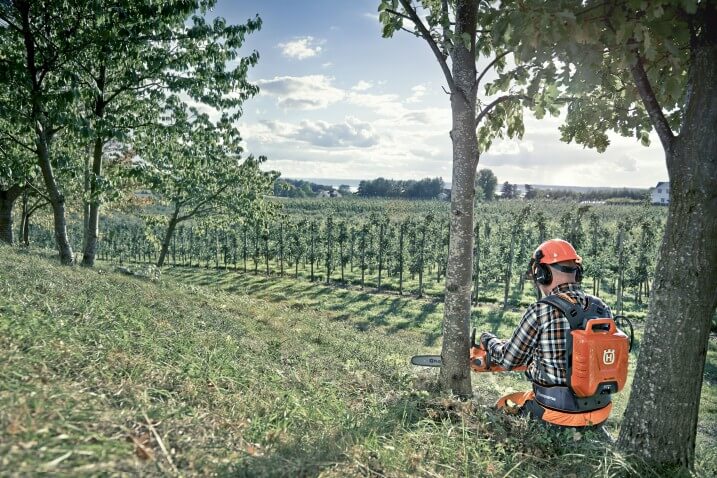 We have come a long way from heavy axes and medical osteotomes. Chainsaws are getting sturdier and more powerful by the year. By using the best chainsaws that the market has to offer, you’re contributing to the constant evolution of the chainsaw industry.
Still leading the industry today, Husqvarna takes the modern chainsaw to the next level. Beginning with the 2016 X-Cut Saw Chain, Husqvarna offered a new cutting experience that resulted in higher efficiency.

When looking for a new chainsaw, you want a machine that gets the job done quickly and efficiently. You’re also looking for a comfortable cutting experience that’s good for you and the environment. Husqvarna chainsaws come equipped with the X-Torq®Histo feature, which makes for fuel-efficient chainsaws that reduce exhaust emission levels while delivering more power.

The future of the chainsaw industry lies with those who know what their customers need; those who know how to deliver, while always looking for new ways to innovate and drive the industry forward. Husqvarna strives to create chainsaws that cut more, longer and better. Success does not slow down innovation.
Something For Everyone

Variety is key. A wide range of products means you can pick the one that works best for you. There are many chainsaws to choose from in the market, but Husqvarna is ahead of the curve. Here are the chainsaws we recommend:

For landowners – The Husqvarna 460. A powerful and robust petrol-powered chainsaw. With a longer guide bar, this model is ideal for demanding cutting jobs that require more power. The body is ergonomically designed, allowing for easy handling of the saw’s power. The 460 utilises a strong X-Torq® engine and features such as SmartStart® and LowVib®.

For those who want the best of the best – The Husqvarna 572 XP. An impressive, next-gen saw that has the best power-to-weight ratio in the market. The large bar increases cutting capacity by 12%, while the excellent cooling and heavy-duty filtration system offer endurance and performance. A chainsaw like no other, built to deliver and last. 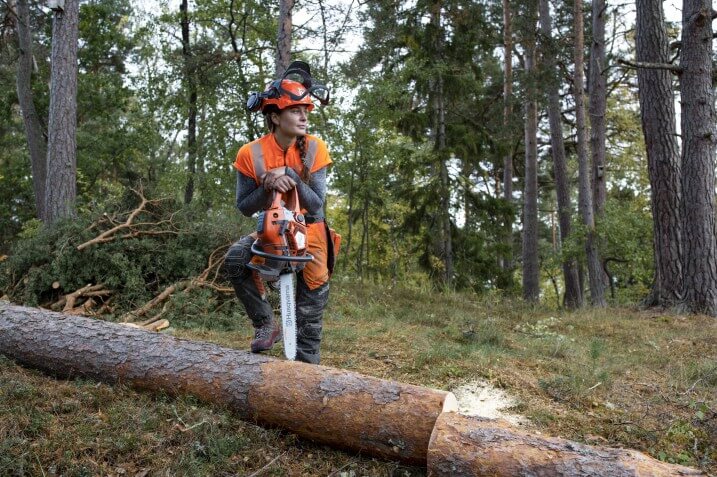 There are many chainsaws to choose from. But when you buy one from a company that’s been making them for 60 years, you know you’ll be getting the best.

Husqvarna launched its first chainsaw in 1959 when the industry was still in its infancy. Before Husqvarna, chainsaws were heavy and noisy machines that were difficult and dangerous to handle.

With a legacy of providing smart and efficient solutions, Husqvarna earned its place at the top of the chainsaw. Over the years, with features such as the AutoTune™ software and the X-Torq® engine, Husqvarna has designed and built machines that have made history.

Inspired by the future, driven by the past. Husqvarna has never stopped moving forward. And you shouldn’t either. By buying chainsaws from those who offer the best and are willing to innovate, you’re contributing to a brighter future for the chainsaw industry. Choose the best. Choose Husqvarna.